You are here: Home / Community / Richard Hardie: “So You Want to be an Author?”

At the Chandler’s Ford library today I attended an author talk by Richard Hardie: “So you want to be an author?”.

Richard is a Chandler’s Ford author who has written two books in the Temporal Detective Agency series – Leap of Faith and Trouble in Mind. He talked to us about being a writer and good writing tips.

One thing which stuck out to me as someone who wants to have a future in writing is how hard it is to have a book published. Richard explained that it is very hard to have a book published without an agent, and getting an agent is even harder. It is because the agents get tons of manuscripts every day and they only read the full manuscript (which are the first three chapters of the book) if they are interested in the first line of the synopsis. It is a very difficult process.

A very important writing tip I learnt was GOWTS– Get On With The Story. This was a point which Richard talked about in regard to the later Harry Potter books, where the books had too many adjectives, descriptions, rambling dialogue and not enough story.

Richard thought that a typical book should be about 200-300 pages long if the author wants it published easily, as the printing cost and distribution will be cheaper. When a book series is established, the books can then get longer like with Harry Potter.

Another important writing tip was creating the characters and making them complex, before a story should be written around them. Without compelling characters, a book will suffer as the reader cannot get invested in the story as they have no interest in the characters. The rule of WWWWWH (Who, What, Where, When, Why and How) is very vital to a good story, with Why being the most important part of writing a story, as without establishing the background of a story the whole plot becomes irrelevant.

Those were the two most important aspects of writing that I learnt from today. I got both books signed and I will start reading them soon. I learnt a lot about writing and tips on how to write better stories. Thank you Richard. 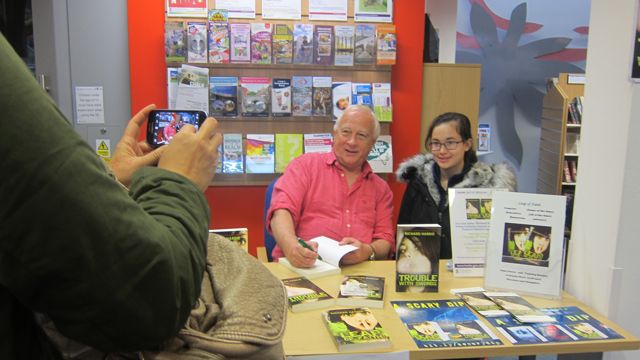 Further Adventures of a Fantasy Author

Ben is studying film and English at University of Southampton. He writes cool stuff - science fiction, Doctor Who, film reviews, and history.