Last Sunday I had a brief interview with Frank Damerell, the 92-year-old war veteran from Chandler’s Ford.

Frank arrived at the War Memorial on Hursley Road just after 10.30am, accompanied by his son Phil. Frank later laid a RAFA (Royal Air Forces Association) wreath during the annual Remembrance Sunday Service at the war memorial at St. Boniface Church in Chandler’s Ford.

Frank’s parents were originally from England (his father from Plymouth, and mother from Kent), so he held both nationalities before the war – British and American.

At 18, Frank joined the Royal Canadian Air Force (though he had tried to join up when he was 16 years old). He swore an oath of allegiance to the king, and gave up his USA citizenship.

Frank proudly said he has never regretted this decision.

Frank retired from the RCAF after the war when he was 21.

Frank was posted by the RCAF to England in 1944 and later married his cousin Nancy. They were happily married for more than 60 years.

He eventually retired from work when he was 70 having spent the rest of his working life in this country in Electrical related industries.

In 2012, Frank and Nancy moved to Chandler’s Ford to be close with their son Phil, his wife Janet, grandchildren Susan and David, and three gorgeous great-grandchildren.

Many people seem to think that Frank was a pilot during the war, but he clarified that he was actually a Night Fighter Navigator.

The aircraft was “The Mosquito Night Fighter”.

Flying as a navigator took Frank over France, Germany and Holland.

Frank said many people could fly a plane, but there was a shortage of navigators during the war.

“I was very good with maps.” Frank smiled, explaining his strength and why he was tasked with navigation.

Frank said subtly, “We were never far from the frontline”.

At the Remembrance Service, Frank wore his medals, including a spectacular one, in green and white – the Légion d’honneur medal, the highest decoration in France, awarded by the French government.

“It is always very pleasing to know that some members of the younger generation really appreciate something which has been done by a previous generation. The French government, having expressed the desire to reward all those who struggled in the liberation of France in 1944, decided to award the Ordre national de la Légion d’honneur to servicemen of the nations who participated.

All the groups of veteran servicemen in this country were circulated with the details of the necessary qualifications and they contacted their members suggesting they apply, which many thousands did. Thousands of the applications were successful and ranks in that order have been issued. There were so many that the distribution had to be done by post but the sense of appreciation has not been lost.

I quote from their letter:

‘As we contemplate the Europe of peace, we must never forget the heroes like you, who came from Britain and the Commonwealth to begin the liberation of Europe by liberating France. We owe our freedom and security to your dedication, because you were willing to risk your life.’

Our thanks to the French Government. 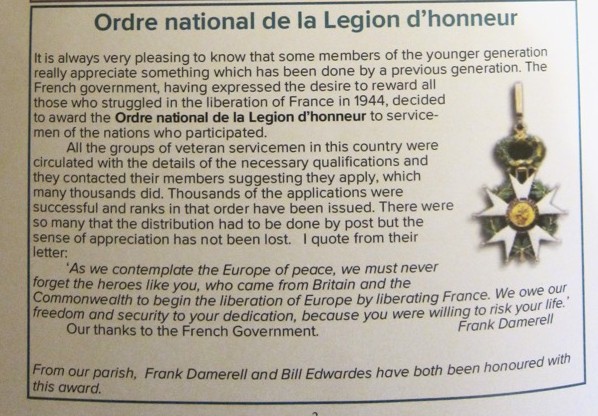 Frank is a very popular man in the parish church.  Frank has been a Christian all his life, and he shared one particularly vivid memory of how close he felt he was with God.

He recalled that on one clear night, the stars were brilliant, he felt that “I could reach out and touch God”. Frank said that overwhelming feeling could only be felt when you are up in the air. Frank’s eyes were filled with emotion when he shared this memory with me.

Though Frank was trained as a pilot but during the Second World War, his role as a Night Fighter Navigator meant that he never had a chance to fly a plane.

Frank’s family knew flying a plane had always been his dream.

So, on his 90th birthday, Frank’s son Phil (‘My wonderful, wonderful son’) and family surprised him with a very special birthday gift – flying an aeroplane. Yes, Frank took control of a plane.

Frank set off from Lower Upham Airfield, near Bishop’s Waltham. A few minutes after taking off, the instructor told Frank, “You can take over now!”

The flying experience was more precious to Frank as in the one hour long round trip, Frank flew down as far as Bosham, near Chichester, where Frank and Nancy had lived happily for 25 years.

“It was the first time in 58 years I flew an aircraft.” For Frank, that was the perfect birthday gift.

Frank says he feels he is very privileged to have lived the life he has: “I may not have any money but I have treasure chest full of memories”.

Credit: Many thanks for Phil Damerell for his assistance in proofreading, and providing family photos of Frank. Special thanks also go to Hazel Bateman and Una Barter from the Parish Church.