You are here: Home / Arts / Producing a Local Legend: Sir Bevis of Hampton

I love history. Always have done. Always will do. I suppose this is because history is another form of storytelling. It tells the story of where we come from.

I believe there is a great deal of truth in the saying that a nation which forgets its history is destined to relive it.

Stories can be told in many ways to reach differing audiences and this is true for history too.  I’ve recently heard of a new comic book (Blood and Valour) and play (The Legends of Sir Bevis) about local mythical medieval hero, Sir Bevis of Hampton.

More recently, the medieval era has been recalled to public memory thanks to 2015 being the 600th anniversary of the Battle of Agincourt.  This continues to be marked by a two year programme called Road to Agincourt which commemorates one of this country’s most famous battles against the French with various events.

Despite the French being numerically superior, Agincourt is remembered for the English inflicting a heavy defeat using what was new technology at the time – the longbow.

The idea behind Road To Agincourt is to raise awareness of the role Hampshire and, especially the areas between The Test and Hamble rivers, played in this  battle. Shakespeare of course ensured Agincourt remains remembered thanks to his play Henry V.

The Road To Agincourt project revisits the events of 1415 and tries to show how the battle affected our area.  The project is supported by the Heritage Lottery Fund, the Arts Council, Eastleigh Borough Council, The Berry Theatre, Agincourt 600 and the University of Southampton.

With the discovery of The Holigost in the Hamble, this era of history has again made it back into national headlines. The ship is thought not to have taken part in Agincourt itself but was part of Henry V’s battle fleet.

Another local link to this period of history is Bishop’s Waltham where Henry V stayed ahead of the battle. I often drive through Bishop’s Waltham and it is a lovely, peaceful place. It’s hard to imagine battle tactics were being discussed here.  The residents around Slapton Beach probably feel the same way about their beach’s World War Two Links.

The tales of Sir Bevis, his love Josian and his giant companion, Ascupart, were very popular and involved battles with lions, giants and dragons the size of cities. Henry V was known to have read and loved tapestries showing Sir Bevis’s adventures across Europe.

Southampton clearly liked the idea of being associated with courage, tales of derring do and so on.

Tapestries were meant to be visual entertainment (Sir Bevis), a historical record (more true for the Bayeux Tapestry than Sir Bevis I’m afraid) and were, of course, a status symbol.  But beautiful as they are, tapestries are not the way to bring history to life for a new generation.  Comic books and plays aimed at the younger generation could be.

The comic book, Blood and Valour, has been written by Hedge End based Matt Bearnes and Marcus Pullen of Blue Donut Studios. The studios produce comics and are based at Eastleigh’s Tec Hub.

Blood and Valour is about to be published through Eastleigh Borough Council’s Digital Arts Programme known as Eastleigh (DAPE). This programme supports new talent with the idea being to create new, colourful and imaginative ways of presenting work.

And it is thought a comic book produced digitally would fit in well with this. Some of the wonderful early artworks by Marcus Pullen are below.

There will be an initial traditional print run of four 26 page issues.  Blood and Valour will be aimed at older readers. It is hoped the comic will become a series bringing Sir Bevis back to life for a new audience.

Given tapestries are visual artworks, having a comic based on the hero of a tapestry is not inappropriate. It could be an interesting way to bring local history to a younger generation in particular (though fans of graphic novels, manga and comics would probably like this).

Marcus Pullen, in the press release issued by the Culture Unit of Eastleigh Borough Council, says “The UK has an excellent reputation for producing comics and our intention with this is for people to buy into it as an example of great British story-telling in its own right that will sit well in comic book stores and libraries. We want to make local history more accessible and show that history is more than just papers in journals; it is people, how they felt and the stories they told.”

This is a very laudable aim. I welcome comic books, manga, graphic novels and so on as they can make a great way into literature for those who might be deterred by more traditional books.

Matt Beames also wrote The Legends of Sir Bevis which was a play adapted from the original texts. The play is to be performed by Year 5 pupils from Freegrounds Junior School in Hedge End and Norwood Primary School in Eastleigh at the Berry Theatre at Hedge End on 10th March 2016. This has been funded by the Agincourt 600 memorial fund.

Looking at the stories of Sir Bevis, if Shakespeare wasn’t inspired by this character, I’d be very surprised.

The comic book and play about Sir Bevis, though a legendary figure, should shine light on Agincourt and its place in our history.  Hopefully these fun ventures will encourage a love of comic books, plays and history in the children who take part or watch The Legends of Sir Bevis and those who read Blood and Valour.

I wish both the comic book and play well. 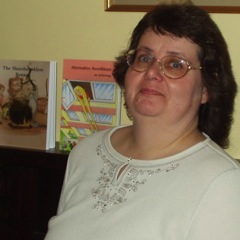 In the Gang Show: Lyn Darbyshire