While I was attending North End Secondary School, I became interested in cycling, not just as a means of transport, but as a sport and pastime.

I was pretty useless at conventional sports like football and cricket, so a chance discussion with another paper boy, introduced me to the Southampton group of the Cyclists’ Touring Club (CTC). This was and still is, a National & International club, with local “Sections” based around the country.

My first bike was an Elswick, coloured dark red. The picture of it was taken in Purkess Close.

I remember attending a birthday party there.

We were outside the house of a school friend, John Clemoes, whose family kept two shops, selling ladies clothing, in Eastleigh.

I don’t think my friend John came with us to North-End from Merdon Avenue school. Whether he passed his 11+ or not, I cannot remember.

The Southampton Section had their weekly clubroom meeting at a pub in Redbridge, just west of Southampton. In the autumn of 1961, I rode with one or two others who were already involved, to Redbridge to “see what it was all about”.

The club organised, and still does, weekly rides, called clubruns, which at that time started near Southampton Civic Centre.

The runs (or rides) took those participating, out to a destination or area on the “Runs List”. Lunch was sandwiches taken with you, but eaten in a pub! (Very few, if any, country pubs provided food in those days, except a packet of crisps, nuts or similar). They welcomed a group who bought some drinks.

Of course, the existing members were far from being a group of school boys, as many of the members were much older.

A couple of school friends soon joined me on these rides. We enjoyed learning not only about cycling and cycle sport, but also about the countryside we rode through, and the history of the places we visited.

The older members were happy to tell us lads about the wildlife, places we visited, as well as help us learn how to ride properly, and maintain our bikes.

I joined mini-tours, often staying at Youth Hostels, where we visited many interesting places. 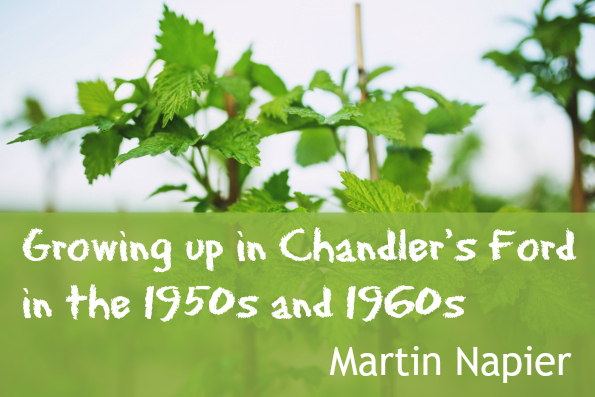 In Easter 1962, my first such tour, around the time I became 15, we rode from Southampton to Bridport, staying at the Youth Hostel there. This was a distance of about 80 miles & we stopped off at Abbotsbury en-route to view the swannery, followed by a cream tea in the village before riding the final miles to Bridport.

I purchased a postcard of the hostel, wrote it and sent it to mum and dad back home. There were Bank Holiday postal collections then as it was Good Friday. The postcard arrived next morning at home!

Our next destination from Bridport was to Crowcombe, west of Taunton, in the Quantock Hills, Somerset. We rode through several interesting places, including the strangely named Wiveliscombe!

From Crowcombe the third night was spent at Street, near Glastonbury. From there we rode homewards, stopping off I remember, at Stourhead Gardens, before riding to Salisbury for tea. We met other club members who had ridden there to meet us. I guess that we rode about 300/320 miles over the four days, and I expect I was well tired.

My dad stumped up for me to have some gears (Campagnolo) fitted to the second or third hand bike I had by then (a “Claud Butler”), and I joined other mini-tours most bank holiday weekends for many years.

I rode on the “CTC” Sunday clubruns most Sundays, which seemed a more attractive proposition than attending Sunday School or church of course!

Some of my schoolmates made fun of me riding with the cycling club, especially in the summer, as shorts were much better for riding than long trousers in warm weather. In those days you were laughed at if you were a teenager wearing shorts, unlike today!

However, I persevered  and enjoyed cycling all the more as I learnt more about it, and its history.

I was riding a ‘fixed-wheel’ on that occasion because my main bike had been shipped across to Guernsey for the Easter Cycling Festival. I had to use my (track) bike which I normally rode on the cycle track at Southampton Sports Centre.

Track racing bikes had no brakes but I could fit and remove the front brake in a minute or two! The Southampton track is rather like an outdoor version of the track at Calshot, or at the Olympic Velodrome in London.

It was lunchtime in a pub garden in Downton, just west of Lymington.

The older chap on my left, was Ernie Bailey, who was one of my early mentors. He and his wife later moved to Northlands Road, Chandler’s Ford. He died about 30 years ago, and his wife gave me his old “CTC” badge, although I don’t know where it is now, I’m afraid! It was old then, and quite a ‘keepsake’.

There are two or three other “North End boys” in the picture. Apart from Colin Bielby (I’m still in touch with him), there is Steve Parker, from Nightingale Avenue, Eastleigh, and I think one other, but cannot remember who. It was a mixed age group, with ages between 17 and 50-ish (Ernie must have been in his 50’s or more then!).

Some of the chaps of about 25/30 or so, often got fed up with we lads messing around! They put up with us grudgingly at times, as I’m sure we were a pain quite often! Gradually we became less of a nuisance and more educated in the ways of cycling clubs, that had, and still have, their own sub-culture.

What’s next: Apprenticeship; Summer Of Hope And Sorrow

I grew up in Chandler's Ford in the 1950s and 1960s. My lifelong passions are cycling and powerboat. I went to Kings Road school, then North End school. I love finding out local history of Chandler's Ford and Eastleigh.