When I was about 12 years old, I started my first (part-time) job.

This was as a Saturday van-boy for Mr Smith, a greengrocer, who had a shop opposite “The Hut” on Bournemouth Road. (not to be confused with Mr Smith who had a grocers shop in Hursley Road, opposite the Railway Station.)

This Mr Smith, for whom I worked, originated from the Romsey area, was known to my step-mother, and had an old green Jowett Bradford van, powered by a two-cylinder engine. He carried potatoes, greens, carrots etc., and had an established round of customers, on whom we called each week.

My job was to weigh out the items and “fetch & carry”, also collect the money on occasions too. I cannot remember how much he paid me, but probably 5/- (Five shillings = 25p). 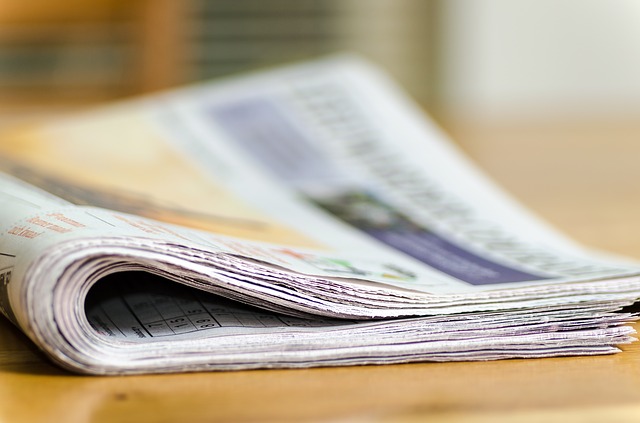 My next move, after a few months, was to apply to “Mac” for a paper boy’s job, as I wanted more money!

Mac, was Major C.L.V. MacMahon, who, with his wife, ran a newsagent’s shop on Hursley Road, where the accounts company is now, by the corner with Park Road and Mead Road, and facing what is now the shops alongside The Co-op (previously Station Garage).

Mac always had a cigarette (fag) dangling from his mouth, and wore a jacket over a pullover, upon which the “fag ash” fell!

I was lucky to obtain a ‘plum’ round – Hursley Road, from the top of Valley Road, including our own home, and up to and including Hiltonbury Farm. This was accessed by a long, rough, stony track, but was made better at Christmas Time, as the farmer, John Vining, always gave a most generous “Christmas tip” (£5 from Mr Vining each year)!

I did morning and evening rounds, six days a week, but not Sundays.

The wages were 13/- a week (= 65p). I used to ride down the mile to the shop with my “Daily Express” paper bag, and return up, delivering, then home for breakfast before riding off to school.

By this time I was at Secondary School – North End, in Leigh Road, Eastleigh.

My father had wanted me to go to Grammar School (Barton Peveril in Eastleigh), but I was not of the required standard academically, due to my lack of ability at maths! (I loved English, History and Geography, but figure work mystified me!)

I therefore failed my ’11+’ exam, and went to the Secondary Modern School instead, much to Dad’s disappointment.

The paper rounds meant that you had to get up early, and back home after school “on time”, so I think it must have been around that time that “Dad” bought me my first watch!

Sometimes my bike needed work doing, and I called in at Mr Beckett’s bike shop on Bournemouth Road, near Kebel Road Corner, (where the Curtis Plumbing shop is now).

Mr Beckett would fix my bike for me while I was at school, and I picked it up on my way home – what service, for just a few shillings!

I often took longer than I should on the morning round, as I have always been keen to learn of the daily news.

I often read people’s papers while walking up their drives or paths, and on more than one occasion was caught reading their newspaper by the householder! (all in good humour though!)

The move from Junior School to Secondary was, probably like now, a bit ‘scary’ for us first years.

North End had a reputation as a tough school. There were pupils from the “Bird Estate” in Eastleigh, then all council houses, and there was much rivalry between those from Eastleigh and those from ‘posh’ Chandler’s Ford.

There were social differences, often exploited, and those whose families owned their own home often ‘looked down’ on those living in council houses.

This was just a part of life then, and although, over time, we all mixed in, some still thought themselves better than others, it seemed. (Is it still this way? We always called those who attended Sherborne House Private School The Sherborne Mouse as a derogatory term!)

North End School had separate boys and girls playgrounds, and most of us still ate the school lunch (called dinner then). Your “Dinner Money” was collected on a Monday morning for the week ahead.

The regime was probably best described as sometimes brutal.

Fights in the playground were frequent, but if you were caught by a teacher fighting, there was only one result, for both parties, and that was a visit to Mr Cooke. Mr Cooke was the deputy Head Master, and dispensed justice to the boys, with one of a selection of canes.

This extended to school uniform too. The uniform for boys and girls was a maroon blazer, shirt and school tie, with grey trousers, or shorts for first year pupils, & grey skirts for the girls.

Woe betide anyone who came to school in jeans (which were just becoming popular then).

We had to line up in form rows after each playground break, and before afternoon school.

Prefects were sent round the rows to spot and pull out anyone in jeans, several times a week.

Wearing jeans warranted a few cuts of the cane from Mr Cooke, and if such checks were carried out twice in one day, you were punished twice that day, unless you lived close enough to school to go home and change!

North End School had been built in the 1930s.

Its Head Master when I was there (1958 – 1963) was Mr Judd. We called him Jack Judd, (but not to his face), and he lived between Otterbourne and Compton. He drove a Standard Vanguard type car I remember.

The classes were mixed, except for “PE”, where boys and girls had separate lessons of course.

PE lessons – cheating did not pay

If you were athletic or good at sport, you were encouraged to try for one of the school teams, football, cricket, or athletics.

Otherwise the games masters did not seem to have much time for you.

I was no good at field sports (I tried golf at school, but only succeeded in digging out divots from the cricket square, which was roped off each summer!).

I could run a little, and we had, in the winter, cross country running. The route was usually out of school, starting from the gate, down Leigh Road to The Leigh Hotel traffic lights and left into Woodside Avenue.

This was a no-through road then, but one could follow the track under a much smaller bridge under the railway than now, and turn left up another track to come out on Oakmount Road. Then left, and left again to school, plus another, second lap.

The Games Master, Mr Woodward, waited outside school to count everyone through. Those who thought they could “skive off” a lap by hiding in the hedge the other side of the railway line were of course found out.

Mr Woodward dispensed his own form of justice in the boys’ changing rooms, with a large “slipper” (plimsole) across one’s backside, bent over in front of one’s classmates, to show that cheating “did not pay”!

I found out that talking in the changing rooms did not pay either on one occasion, too!

However, the lessons were, in view of the great numbers of pupils, very good.

The teachers I remember

Several of us, before our voices “broke”, joined the school choir, under Mr (Charlie) Tryhorn. He had been the organist at Romsey Abbey, but later left there under a cloud, I heard.

As a member of the choir, one had certain privileges, so it was worth while being a member.

Mr Tryhorn, however, had a certain way of keeping order in his music classes (not for nothing did we call him “Charlie Chair Chucker”)!

I remember several of the teachers: Miss Kinerley who taught Geography, Mr Parry and Mr Lambert (art), Mr (Dag) Phillips, who was our form master in the fourth year, and Mr McGregor, the Woodwork Master. Mr Smart who taught us English at one time was another, Mr (Robot) Smith – Science, and Mr Goodwin who taught us about (or tried to) gardening.

I will tell the stories about our adventures in the school garden soon.

I grew up in Chandler's Ford in the 1950s and 1960s. My lifelong passions are cycling and powerboat. I went to Kings Road school, then North End school. I love finding out local history of Chandler's Ford and Eastleigh.