Chris Goodhead (treasurer) presented the accounts to December 2014, which showed a cash surplus of about £15,500 at the year end – a comfortable position.

Sufficient churches had come forward to guarantee the rent for the term of the lease.

For accounting purposes, the value of the food donated during the financial year has to be estimated and included in the accounts.

Food donations during 2014 were estimated to be worth £41,000. This was considered to be a conservative estimate, based on supermarket prices for the cheapest type of that product.

What has Eastleigh Basics Bank achieved in 4 years?

He showed a graph demonstrating two or three peaks in the year when demand rises. These include the summer holidays (no free school meals available for children), December and February (Christmas/high fuel bills).

Many poorer people have to use the key card system for purchasing their fuel (more expensive per unit than other forms of payment) and this can mean less money available for food. They do not have overdrafts/credit cards to enable them to spread the cost of Christmas.

He explained that Job Centre Plus was no longer able to give out EBB vouchers as the government did not permit them to ask searching questions about a client’s financial situation, so Job Centre Plus issued claimants with details of places, such as Citizens Advice Bureau, where vouchers could be obtained. 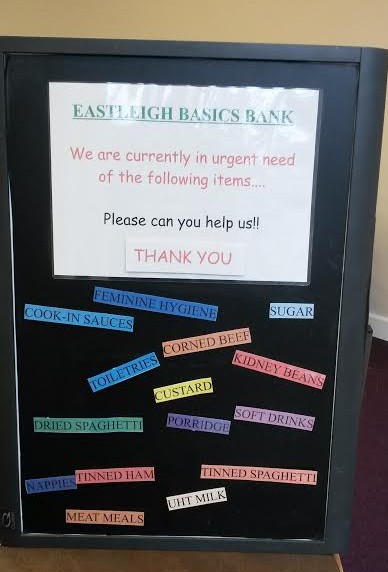 How could you help Eastleigh Basics Bank?

A presentation was made to Dave Keating in recognition of his work with EBB since its inception. Dave observed that he opened EBB, but God keeps it open.

During the Hope Eastleigh event in the summer, Dave Keating explained how Eastleigh Basics Bank has fed 11,000 people in Eastleigh in four years:

I have lived in Chandler's Ford since 1987. I collect food donations from St. Boniface and St. Martin in the Wood every week and transport them to Eastleigh Basics Bank. I also carry out other voluntary work for the church as part of my Christian lifestyle.

I work part-time as a self-employed assessor/tutor for dyslexic children. My hobbies include reading, 1000 piece jigsaws and walking in the countryside.