This was a big wedding even by Sri Lankan standards.

Some 480 guest met to celebrate the nuptials of Pavithi Weerasinghe with Udara Rajanayake, both physics graduates from the University of Peradeniya.

I have known Pavithi since she was a babe-in-arms in Southampton. Her father, Vajira, was doing his PhD under my supervision.

Pavithi’s brother, Nipuna, was born in Victoria House of Southampton General Hospital. The Health Visitors were very concerned because he was so small. Eventually Vajira obtained growth charts for Sri Lankan babies and proved he was OK for his age; Asian children are smaller than European.  Look at the picture of Nipuna now, no problem there.

The wedding took place under the mango trees and on the bank of the Mahawali River. Groom first and then the Bride were serenaded into the location, a large hotel, by a troop of Kandyan Dancers with their drums and conch shells sounding joyously.

We processed as the last of the Bride’s party. I felt someone nudging my heels; it was the hotel worker rolling up the white (as opposed to red) carpet behind me.

The Groom’s men wear an elaborate red jacket as worn by former Kandyan Kings from 600 years ago. Kandyans are very proud of their former independence in that they were never ruled by the Dutch nor Portuguese and even the British until the King’s Nobles betrayed him in 1815.

Dress for the ladies was a Sari, the most elegant form of dress, and for the men a boring suit with collar and tie.

The service was Buddhist and in Sinhala. It was very relaxed and you could get close to watch or just sit and chat to friends. During the process the hands of Bride and Groom were tied together and they later gave one another food and drink. The ceremonial glass was very full and I feared that nervous and shaking hands might spill the milk it contained.

Being Buddhist there was no alcohol.

After the joining a coconut was smashed to encourage fertility (you do not ask how that works.) There were other rituals involving a betel tree leaf and some rice.

Then the marriage was registered by the civil authorities before all of us. Afterwards there was plenty of time for socialising before a buffet meal. Seating arrangements were informal and we occupied 3 different places during the meal.

Then, of course the disco with Baila music, a mixture of African rhythms with Hindu melodies and vocals. We all danced vigorously but it was de rigeur that the men did not remove jackets nor ties.

There were no speeches but everyone was expected to present themselves to the Bride and Groom and each guest was given a photograph of the happy couple with their attendants.

The astrologers, the Bride’s Uncle is one, had decided that July 2nd was to be favoured day and that 08.45 am was the most auspicious time but the Bride and Groom must leave for their married life at 15.00 hrs. They were an hour late leaving but I’m sure that stars in the firmament stopped in their orbits until they left.

Just before leaving the Bride and Groom knelt before their parents and grandparents to touch the hem of Mother’s sari and to receive their blessing bestowed by a hand on their heads. Honouring your parents and teachers and older relatives is very important in this society. 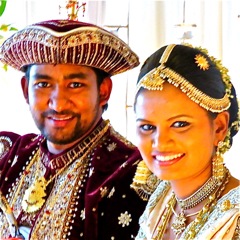 A very relaxed day. Everyone chatted and introduced themselves.

The adherence to old cultural superstitions and rituals, which none of the educated participants believe in, was interesting for us.

The most beautiful of locations. During the ceremony a Fish Eagle was hunting the river as a backdrop to the couple.

There was no alcohol as it was a Buddhist wedding. You may not like the idea but the event was better for it.

A definitive end to the proceedings was an advantage. After the Bride and Groom departed we were free to change and swim in the hotel pool.

Do Superstitions do any harm?

Life might be duller without our rituals and superstitions. Sometimes superstitions squeeze out or replace the truth and that is not good thing.

I knew a couple who failed to conceive and who pursued all manner of rituals prescribed by their church. Eventually they saw a doctor and a simple medical problem was corrected resulting in a lovely family. Of course, the church gets the credit.

Usually the truth is more interesting than the superstition. Can you think of an instance?

The Cultural Triangle Of Sri Lanka

This Is The Record Of John

A Temple For A Tooth?

Retired, almost. Lived in Chandler's Ford for 20 years. Like sitting in the garden with a beer on sunny days. Also reading, writing and flying a glider. Interested in promoting science.

I work hard as a Grandfather and have a part time job in Kandy, Sri Lanka for the winter months. Married to a beautiful woman and between us we have two beautiful daughters and 3 handsome sons.