Three days after Eastleigh’s seven-match unbeaten run ground to a halt in Torquay, goals from Jack Midson and Michael Green, against a gritty but limited Dartford side, set the Spitfires back on the winning trail.

Paul Reid’s one game suspension meant that Richard Hill had to tinker with his back-four, the hosts’ manager pairing Will Evans and Dean Beckwith in the centre of defence, returning Dan Spence to his accustomed position on the right and handing Jamie Collins left-back duties.

Collins was heavily involved early on – at both ends of the field. The ex-Havant & Waterlooville man delivered a wicked free-kick from the right that just evaded the touch of Midson. Either side of that incident it was Dartford doing the pressing. Ryan Hayes squared up Collins to send a cross drifting beyond the far-post, while the same visiting player, having collected possession from Nathan Collier, ran at the Eastleigh man to centre for Tom Bradbrook, whose header was directed straight at Ross Flitney.

Eastleigh’s first dig at goal came after another Collins set-piece, this time a corner swung in from the right. With referee Paul Rees ignoring a ridiculous amount of grappling in the box as the ball drifted in, a half-clearance landed at the feet of James Constable. The striker reacted by firing a snap-shot that whistled past Jason Brown’s right post.

With the Darts midfield three of Peter Sweeney, Max Cornhill and Elliot Bradbrook effectively smothering that area of the pitch, and wide-men Hayes and Luke Daley dropping to form a compact five across the field, a certain amount of patience was going to be required for the home team to pick their way through.

The signs were promising when, in the 13th minute, Evans stepped between two yellow shirts and out of defence, to find Spence. Spence moved play on to Craig Stanley, who worked the ball up the line for Constable. As he lost his footing, the ex-Oxford United forward cleverly improvised to feed Spence’s lightning overlap. The full-back only won a corner for his efforts, but the Spitfires had displayed the ability to penetrate what would be a doggedly stubborn Dartford outfit.

Two minutes later, however, the visitors forged what was probably their best opportunity of the night. Beckwith spied that Jai Reason had drifted inside to pick up a pocket of space, but the defender delayed his ball a second too long, allowing Cornhill to read the pass and intercept. Play moved forward to Tom Bradbrook, who showed impressive strength at the 18 yard-line to hold onto possession and roll-in Sweeney to his left. Flitney was at the midfielder’s feet in an instant, rushing out to make a crucial block and preserve the stalemate.

Buoyed by that escape, Eastleigh went back in search of a breakthrough. Reason touched Spence’s long ball into Constable’s path, the striker sending a rasping 18 yard drive too high before, minutes later, he powerfully kept play alive in the Darts area. On this occasion the ball ran for Ben Strevens, who somehow resisted the attention of three away defenders to force a shot on goal that was comfortably held by Brown.

A blustery, bitter wind circling the Silverlake Stadium wasn’t conducive to flowing football, and both teams were finding the task of keeping hold of the ball a devilish one. On 27 minutes the Spitfires knitted together their most cohesive move, so far. Strevens wasn’t fooled by Sweeney’s ‘look one way, pass the other’ tactic on Eastleigh’s left, nipping in and setting in motion a snappy move that ultimately saw the ball worked out to Beckwith on the right.

The centre-half floated a terrific ball forward into the path of Spence, who ended his latest attacking burst by sending over a deep first-time cross that eventually fell to Stuart Fleetwood. The forward took a sumptuous first-touch, before sending his second whistling over Brown’s bar.

Elliot Bradbrook was the only one of the Darts midfield trio routinely seeking to break beyond his striker, but it was Sweeney’s hard- hit shot on 34 minutes that drew a block from Spence and launched the home team onto the counter. Constable bent his run to stay onside and receive Stanley’s pass out to the right, before returning play back into his team-mate. Stanley’s charge was stopped by Collier’s excellent tackle, but Strevens swooped on the loose ball to send an attempted chip at goal that Brown was relieved to clutch to his chest.

The Spitfires were knocking at the door now, an impression given extra credence when Reason got round the back of the visitors’ defence to cross low from the right for Constable to rap a low shot that struck the base of the near-post. The rebound ran back for the striker to send a second effort on target, this one crashing into the body of the prone Mat Mitchel-King and deflecting behind.

Dartford were painfully close to reaching the break with their goal still intact, only for Midson to intervene. The striker, starting just his second game following a lengthy absence with a shoulder problem, won the initial corner, receiving a pass from Fleetwood and racing down the left before seeing his final ball cut-out by Mitchel-King.

Reason hit the resulting corner to the near-post where Midson, who had already demonstrated his aerial prowess at the other end by twice rising to clear dangerous deliveries from a crowded box, met the delivery to plant a finish high to Brown’s right and into the net.

The tone of the action immediately after the interval continued in much the same vein. Flitney’s handling was shown to be up to the mark when he dealt confidently with a couple of high balls into his box, but the more incisive work was coming from the home team.

Fleetwood, briefly switched to the right, applied a turn of pace to scurry by Tom Bender and cross for Midson, who couldn’t quite get hold of the ball, allowing it to run harmlessly through to Brown.

Evans and Fleetwood then took it in turns to pass forward, freeing Spence to find Reason in the area. The playmaker, returning to the Spitfires line-up here after having to sit out Saturday’s defeat in Devon owing to a one-match ban, beautifully disguised his square ball for Midson. Nevertheless, the earlier goal-scorer couldn’t repeat that trick, Brown tumbling to his right to push out the striker’s shot.

The ubiquitous Midson was at the end of another energetic home sortie. Strevens found Fleetwood – now stationed back on the left – and kept moving into the area to collect Constable’s final pass inside. Strevens pulled the ball back for Midson, but the ex-AFC Wimbledon man couldn’t keep his strike on target.

Bender tried to take the fight back to the increasingly dominant hosts, catching Fleetwood on his heels to nip in and tear forward, skipping by Spence on his way, before being cut to the turf by Stanley, who was yellow carded for the foul. With the Spitfires 18 yard box loaded, Hayes’ consequent free-kick was cleared, before Reason just failed to link up with Constable on the break.

Fleetwood and Constable were withdrawn on 69 minutes, but not before they had combined to carve open another shooting opportunity. Constable poked the ball between Bender’s legs, finding Spence. The defender lifted his head and slipped a pass inside to Fleetwood, who could only drag his effort wide of goal.

Hayes had a sniff of an equaliser when, with 19 minutes left on the clock, Strevens was uncharacteristically nudged off the ball by Elliot Bradbrook, the away skipper then locating the winger to drift in from the right before blazing over.

Brown, who would leave the pitch in an unconcealed rage at the final whistle, lashing his water bottle to the ground just before disappearing down the tunnel, produced the game’s standout stop on 73 minutes.

McAllister, on alongside Green when Constable and Fleetwood had departed, found Reason, who hung a teasing cross from the right all the way to Collins at the back-post. Now deployed back in his more familiar midfield surrounds – and having put in a solid display in his original berth – Collins saw his point-blank header kept out by the Welsh goalkeeper’s splendid one-handed save. Mitchel-King was swiftly onto the scraps to nod behind his own goal.

The ‘keeper then punched Reason’s corner out on the other side, before Green’s ensuing flag-kick was knocked back into a central position by Evans. McAllister swooped to tee-up Beckwith, with Eastleigh’s captain, amidst vociferous home appeals for handball, seeing his shot blocked.

It was only a matter of time before Dartford were compelled to show more ambition. The change in tack was signalled with a quarter-of-an-hour to play. Visiting boss Tony Burman hooked Daley, Hayes and Tom Bradbrook. The trio of freshly introduced Darts, Danny Harris, Bradley Tarbuck and Lee Noble, all arrived with attacking intent. Harris and Tarbuck made a front-two, while Noble played at the top of a newly formed midfield diamond.

Midson, desperately stretching to get on the end of Reason’s cross from the right, couldn’t apply any direction to his 80th minute header, before some baffling officiating left Hill fuming. Yemi Odubade replaced the stricken Stanley with five minutes to play, but before the substitute had assumed his position referee Rees allowed the away team to take a free-kick. The subsequent passage of play ended with Tarbuck shooting narrowly wide – probably sparing the man in the middle even more of a verbal volley than the one he received anyway.

It was another substitute who eventually settled the outcome. McAllister and Odubade linked to win a corner in front of the Silverlake’s new South Stand – if the noise emanating from that structure during the second period is a gauge of things to come, then this ground really will take on a whole new atmosphere.

Green’s whipped delivery somehow ran all the way through a crowded six-yard box and into the far corner of goal. It all looked so simple – and entirely out of keeping with the difficulties Dartford’s obstinacy had posed their hosts. 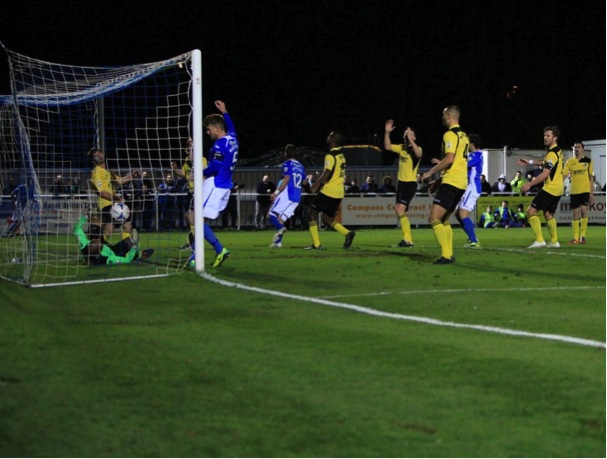 Back in September, at their own Princes Park ground, the Darts had summoned all their fighting spirit to rescue a point, having been faced with a two-goal deficit against the Spitfires. Here, there were late efforts for Cornhill and Harris, whose near-post header from Callum Driver’s right-sided delivery fizzed across goal, but by then a dramatic recovery was out of the question.

This was a fine riposte from Hill’s men to Saturday’s reverse. Now, after Stanley’s enforced exit, and with a few other bumps and bruises visible, the hope for Eastleigh must be that, come Sunday and the huge FA Cup tie at Southport, this triumph isn’t retrospectively viewed as a Pyrrhic victory.

The More We Win, The Better It Will Be by Paul McNamara 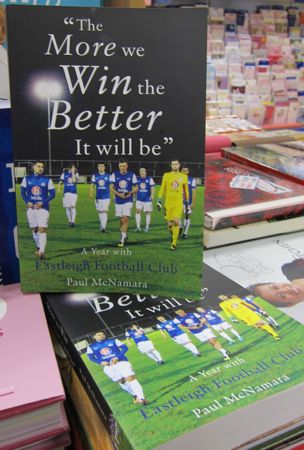 Eastleigh Football Club is an ambitious semi-professional club that in 2013/2014 competed in the Football Conference South.

Ten years earlier, they were a much smaller club, playing in their local regional league.

Progress from that lowly status saw the team spend the 2013/2014 campaign challenging for the Conference South league title and promotion into the Conference Premier Division.

This is the story of Eastleigh’s momentous 2013/14 season. The book provides a compelling insight into the day to day life of the club, on and off the pitch. It recounts the events of the season as experienced by all those involved.

This is a limited edition first book from Paul McNamara.